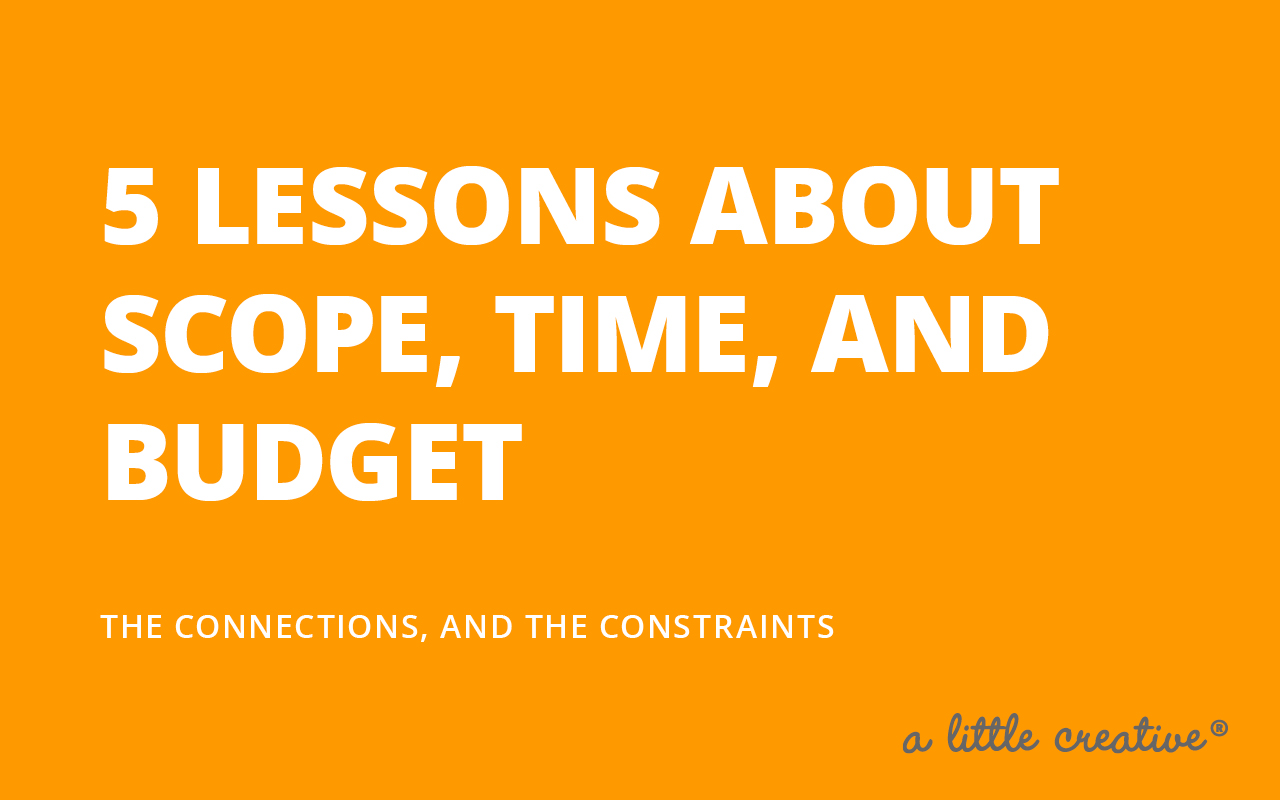 If you’ve visited me on Instagram you probably know that I just completed yet another home renovation. And with all the recent projects and my renewed love for interior design as well as graphic, it’s got me thinking about the ways that the various areas of design overlap. I’ve distilled them down to a core set of lessons, most of which I’ve learned the hard way, both as a designer of things, and as a small business owner.

These lessons are all about the connection between and the constraints of:

You’ve likely heard the quip about Fast, Good, and Cheap. You can only pick two because the three are inexplicably tied to one another and you can’t change one thing without adversely affecting the others.

So if you have or work in a small business, or are embarking on a project in the world of design, listen up. These lessons are for you.

Lesson 1: things always take longer than you think they will

As humans who are wholeheartedly dependent on technology, we’ve gotten spoiled to the speed at which information is available. So similarly, we expect the same instant gratification for everything else. As if everything in life should happen as quickly as launching a web browser on a computer.

Sadly, that’s just not the case.

Humans are naturally fallible creatures. We are terrible at estimating (like, abysmal), and we frequently make mistakes (whether we admit them or not). And estimates are really just guesses anyway—sometimes uninformed ones. So depending on the scale and scope of what you’re doing, be it a logo project, a website, or a kitchen remodel, understand that even with the best of intentions and what you believe to be proper planning, the timeline will likely be extended.

For example, the initial timeline my contractor gave me for our most recent renovation was 2.5 weeks. The actual time was nearly 6 (I’ll get more into the reasons why below).

I’ve experienced similar delays with other projects as well. An identity project that was initially estimated to take 4 weeks ended up taking 7. Another consulting project turned a 5 week engagement into 8. It happens, more often than not.

When you consider things taking extra time, it’s not necessarily a bad thing. However, it does have an impact on the bottom line.

When you change the timeline, it also affects the scope or the cost of what you’re doing, sometimes both.

These are things you need to be aware of up front so that you can have realistic expectations from the beginning rather than setting yourself up for disappointment.

This is typically the cause of Lesson 1, but again, it’s not necessarily a bad thing; it just is. Work is done by humans and humans are fallible, remember?

Perhaps wrong is not the correct word. But things do—and will—change.

For many small businesses, growth and change is not only rapid, but sometimes drastic; particularly for those that operate in the digital or online space. Technology changes daily and to keep up, you need to adapt, which translates to change. This is also common for people in the infancy stage of business. You’re still figuring out who you are, who you want to work with, and the best way to help them. Which again, can change quickly and drastically.

Even with the best of intentions and quality time invested in research and discovery, you simply can’t know everything at the start of a project.

Nor can you anticipate when new information will surface or become available. But when it does, you have sudden and unexpected cause for change.

When we renovated our fireplace wall a couple of years ago, we initially planned to have it open on 3 sides (sort of like this). However, when we opened up the walls and got a look inside, we found that our main sewer line ran right down the wall we wanted to open up. Sure, we could have rerouted the sewer line, but changing the scope in such a way (since the re-routing wasn’t initially planned or budgeted for) meant that both the timeline and cost would be impacted, significantly. So we changed the plan and opted for a 2-sided fireplace instead.

During this most recent renovation, we had a custom stair railing constructed, which included a mixture of aluminum, stainless steel, and wood. Initially the railings were supposed to be the first piece to be installed. In the end, they turned out to be the last.

The subcontractor had never done this exact fabrication before and had some difficulty obtaining a smooth paint finish where the two metals were connected. It wasn’t something they could have anticipated (since they’d never done it before) and is an example of how you just can’t know everything at the start, even with the best of intentions.

Similarly for that seven week identity project, a change in scope caused a delay to the timeline. Shortly after we had started the design process, the client got a cease and desist letter for their business name, which another small business was using.

Not wanting to go through a fight or lengthy trademark process, my client decided to change their business name, which also caused us to have to begin the design process over. Luckily we had only just started and were able to stop work until the issue was resolved. But had we been farther along, costs would have also been impacted. And not for the better.

Lesson 3: establish a budget, then plan to exceed it

I’ll start with the caveat that there are times when cost is not impacted. BUT… often times it is and you should be prepared with some kind of contingency. Having a plan in place, particularly for monetary investments, is so much better than being surprised with a giant bill that you didn’t expect.

Back to our fireplace project…

Shortly after we completed the project, we noticed cracks in the drywall around the edges of the fireplace on both sides (2-sided, remember?). So when we did our most recent renovation, part of what we asked our new contractor to do was repair the cracks.

When the contractor began the repair, however, they noticed that the side wall that joined the two face walls (and covered our sewer line), was terribly uneven. In order to correct it they would have to remove and replace the entire wall of drywall, then re-mud the joints AND THEN fix the cracks… for an additional $500-$700.

That consulting client I mentioned earlier also exceeded her initial budget. From the beginning, our work was carefully planned out over the course of 5 weeks. We would meet once a week for 1 hour with a specific agenda for each meeting.

Around week 3, the material started feeling very heavy for the client. They realized that many of the things we were discussing had implications far beyond what they had initially thought, which caused them to want to rework their service offerings. As such, they requested two weeks for each session instead of one so that we could also review and restructure her services.

It’s perfectly acceptable to need more time, but because this was time and and work that wasn’t initially accounted for, the costs associated were also more.

Lesson 4: everything is connected

In business and in design, everything is connected.

Doing one project or making one decision, usually has implications on something else, whether you know it at the time of decision, or realize it farther down the line. You do one thing and then suddenly, in doing that thing, you’ve created two more things.

Another fallout from our fireplace renovation was that we didn’t consider the impact it would have on what was physically connected to the fireplace—like the floors. We had a concrete hearths poured on each face of the fireplace and in order to build the frames for the pour, the contractor had to cut away several inches of the wood floor on all sides, exposing the concrete subfloor below.

Now, we hated the wood floors we had at the time, but hadn’t budgeted for renovating them (because motherfucker are wood floors expensive). With nearly 1100 sq. ft., it wasn’t something we could afford at the time. Nor did we have any extra floor material, which eliminated the possibility for a patch and repair job. So we lived with subfloor exposed for another year before we could afford to replace all the wood.

This kind of thing is not just limited to interior design though, it’s very common in the world of graphic design as well. I’ve worked with a number of clients on redesigning their logo, where they’ve failed to consider everything that’s connected to that logo that will also require time and money to change.

A new logo is a great step in the rebranding process, but you must also consider the things connected to your brand that you use on a frequent—if not daily—basis. With a new logo you’ll also like need to change your:

The list goes on. And it all takes time and money.

A logo is just one of many visual representations of your brand. You could tackle some of these at different times, but think about the impact it might have on your audience and customers to see inconsistent messages and visuals from you. It could potentially do some damage to your brand reputation and ultimately, sales, which just ain’t good for business.

With as ingrained as technology has become in our daily lives, it’s sometimes easy to forget that there are real human people behind those websites and contact forms. And at the end of the day, people want to feel valued and like they are more than just a number to the businesses they’re buying from.

Now this doesn’t mean that the customer is always right. But, relationships are built on trust and trust is earned. So if you are transparent and forthright with your customers, about the good AND the bad of the job, it helps build that trust.

Sometimes it’s also the difference between being a vendor (basically an order taker) or a strategic partner. You are the expert in your business, and should guide and educate your customers on whatever it is your selling, whether it’s products or services.

Being a vendor is typically a lot of “Yes”, while being a strategic partner means saying “No” when you need to.

Everyone (and business) will have a different idea on exactly what good customer service is, but in my opinion it means being the following:

Most of these lessons are ones I’ve learned ten times over (and am still learning). They may be obvious to some, but if you take a close look at your own work, you’re probably still learning them as well.

Business (hell—life!) is a constant work in progress, though, right? So I’m learning everyday. Hopefully you are too.

How have these lessons shown up in your life and work?