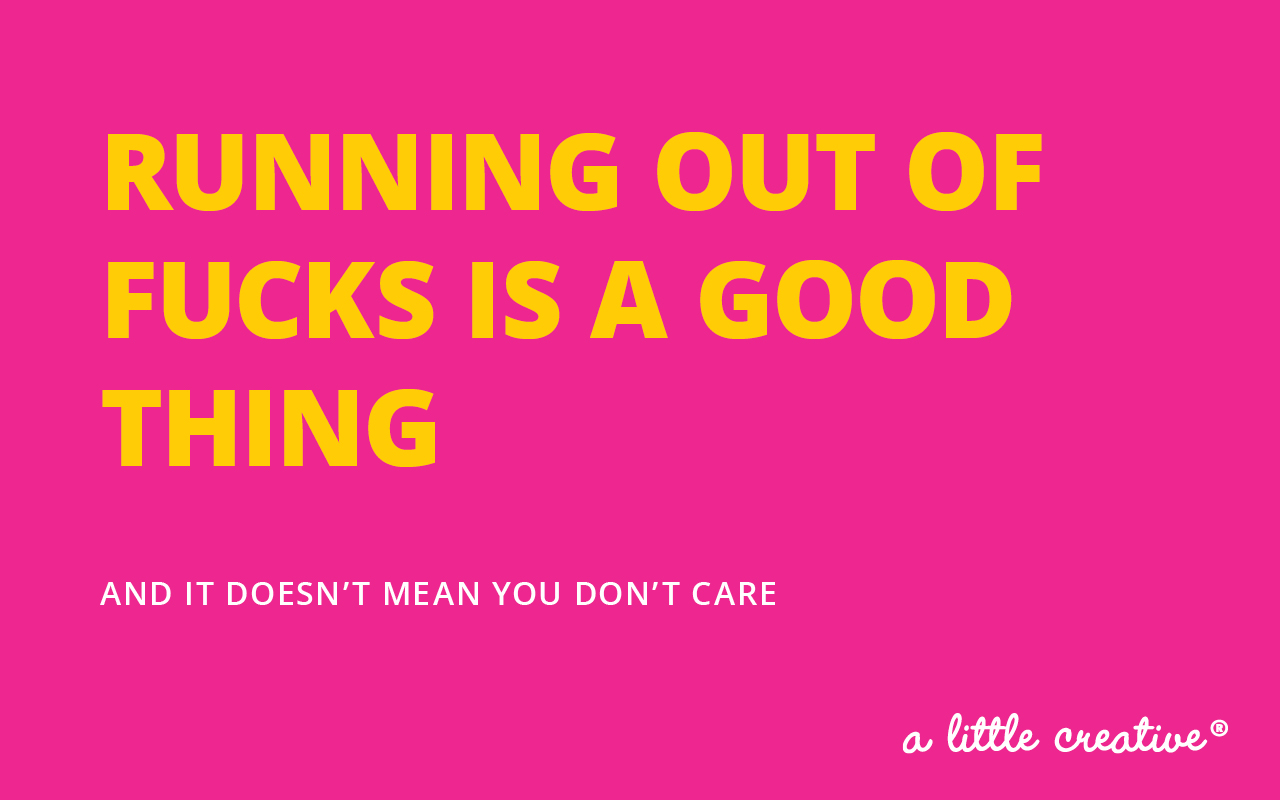 I ran out of fucks recently and while at first I thought it would be temporary, I quite like living without them.

Social media may lead you to believe that running out of fucks makes you insensitive. I disagree. Although usually presented in a funny way, social media gives the impression that those who have run out of fucks are assholes. I think they’re strong.

What I’m trying to say is that running out of fucks is a good thing.

If you run an online business, or are involved in the online world at all, you’ve likely heard people talking about their insecurities and fears. It’s no secret, we all have them.

Yet when you operate primarily online, where things are often qualified as Instagram-worthy or Pinterest-perfect, it can sometimes feel like those fears and insecurities are yours alone.

Nod your head if you’ve ever had or done any of the following:

I bet you’re nodding your head yes, aren’t you? Don’t worry, I am too. But no more, since I ran out of fucks.

Running out of fucks in no way means you don’t care.

Running out of fucks actually means you care more.

Yes, there are people in your industry who charge less than you.

Don’t give a fuck about them. There are also people who charge more. Potato, po-tah-to.

Price your products and services where you feel they should be priced and throw the comparison out the window. There are people who will pay your prices, you just need to find them.

Yes, you can discount your prices.

But only if you want to. And don’t give a fuck about doing it every time someone asks. You make the rules and are therefore free to break them when and how you see fit.

Just be clear about one thing: if you feel physically assaulted by someone’s reaction to your fees, don’t give a fuck about reducing them. They’re most likely making their decision on price and not experience or value.

Don’t make it a habit. Depending on what it is, you can always course correct and enforce it the next time. And if someone challenges you on it, don’t give a fuck. You gave them a freebie and were being helpful the first time; you’re welcome, kthxbye.

Yes, you said yes to something you should have said no to.

Big deal. This is not the only time you’ll have to make a choice. Next time, don’t give a fuck about saying yes. If you want to say no, say it. No is not a bad word. It is also a complete sentence.

Yes, you tried to justify your ‘No’ with a bunch of reasons why.

No one cares and honestly, it’s none of anyone’s business why you’re saying no. Next time, say no and then shut your mouth. Don’t give a fuck about saying why unless someone asks. And even then, you are under no obligation to tell them (unless you’re going back on a commitment you previously made).

I get it, I have relatives too. But stop. You do not have to accept someone’s shitty behavior simply based on your relationship (mother, spouse, boss, etc.) whether the behavior is directed at you or not.

Understand though that you can only control your own behavior, not anyone else’s. So even if you don’t want to confront them or have a difficult conversation, give some thought to your own personal boundaries and enforce them (perhaps when they start gossiping/bitching/complaining, you make an exit).

See also, that thing you should have said no to.

Yes, you purchased a product/meal/thing that you weren’t totally happy with the quality of.

Perhaps you even hired someone to do work for you. An exchange of money is both business and relationship, so give no fucks about staying quiet (unless it’s something you’re totally ok with). Simply state your displeasure/disappointment/dissatisfaction and ask for what you want (that part is key, don’t leave it in their hands).

Yes, you passed up an opportunity.

Don’t give a fuck if you don’t have every iota of qualifications an opportunity calls for. That’s why it’s called an opportunity.

Go for it; try. The only way to ensure failure is to not try. Reframe your thinking and punch fear in the face. Even if the answer is no, the second no will be easier than the first, the third easier than the second, and so on.

Do you see where I’m going with all of this? Running out of fucks can be equated to growing a pair of balls (proverbial balls, but balls nonetheless).

And most of all, have the balls to feel good about doing it.

I’ve been looking for a job recently (craving more stability and collaboration) and I’ve submitted so many applications and received so many subsequent “No’s”, that I’ve literally lost count.

And you wanna know how I feel about it?

Sure, the me who had fucks to give would have thrown an immediate and rather large pity party. However, the me who’s run out of fucks knows it wasn’t the right fit and to just keep at it. Out of fucks me knows that not getting a particular job doesn’t make me a failure.

Running out of fucks is a confidence booster. It’s not as scary as you might think. It’s just stepping into the shoes you know you were meant/want to fill. Knowing your deal breakers, stating them, enforcing them, and standing by them—both personally and professionally—is a game changer.

Call it confident, call it ballsy, call it bold—call it running out of fucks. By any name, it’s 100% worth it.